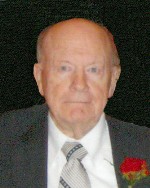 Mr. Wright worked as a bank auditor at Southern Illinois National Bank of East St. Louis for more than 40 years.  He was a United States Army Veteran and served in Normandy on D-Day, in Northern France, Central Europe and Rhineland. He was awarded four bronze stars for his participation in those campaigns. Noel was a member of the Veterans of Foreign Wars.

He was preceded in death by his wife of more than 50 years, Marietta, nee Ross, Wright; a daughter, Donna Wright Zakas; his father, Robert Wright; his mother, Elanora “Bessie”, nee Grant, Wright-Bullock; a son-in-law, Martin Scharf; and a brother-in-law, Joseph Crabb.

Memorials may be made to St. John the Baptist Catholic School, Smithton, IL. Condolences may be expressed to the family online at www.rennerfh.com.