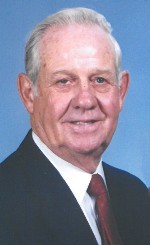 Norbert was the last surviving member of the Henry and Anna Haake family. He joins his parents, seven brothers and sisters, and his wife, Jeanette.

Norbert graduated from Aviston Community High School in 1944. After graduation, he was drafted into the United States Navy and served in World War II and the Korean War. Norbert was a member of St. James Catholic Church, Millstadt, IL, and started the Annual Dinner Auctions which helped to build the St. James Parish Center. He was a member of the American Legion, the Korean War Veterans, Carpenters Local Union 433, the Serra Club, and former Vice President of 4 Star Homes in Belleville.  He and Jeanette became founding members of Our Lady of the Snows Shrine in 1969, and they moved to the Shrine Apartment Community in December 2015, where Norbert lived until his death.

Memorials may be made to St. James Catholic Church Parish, Millstadt, IL, or to the apartment community at the Esquiline.  Condolences may be expressed to the family online at www.rennerfh.com.