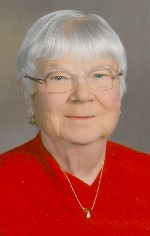 Norma Jean was involved in many activities with St. Augustine of Canterbury Catholic Church and School.  She was past-president of the Queenship of Mary Sodality and a former chairman of the Penny Carnival fundraiser. Mrs. Friederich had also volunteered her time working as a room mother and a cafeteria worker. She worked many parish fish fries and drove for Meals on Wheels. She crocheted over 300 prayer shawls over the last ten years. Norma Jean’s one athletic activity was bowling.

She was preceded in death by her husband of 47 years, Vernon Friederich, whom she married on April 21, 1948, and who died on March 27, 1995; a five-year-old daughter, Barbara Jean Friederich, who died in 1956; a daughter-in-law, Barbara Friederich; her parents, Charlie and Mary, nee Branch, Richardson; three brothers; and four sisters.

In lieu of flowers, memorials may be made to St. Jude Children’s Research Hospital.  Condolences may be expressed to the family online at www.rennerfh.com.

Funeral: A Mass of Christian Burial will be held at 12:00 noon Tuesday, November 24, 2020, at St. Augustine of Canterbury Catholic Church, Belleville, IL, with Msgr. William McGhee officiating. Standard CDC guidelines, including masks, will be observed.