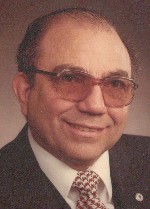 A meat cutter by trade, Norman was employed for 23 years at the Belleville A&P Stores. He was Head Meat Cutter for 17 of those years. He was the retired president and business agent of U.F.C.W. Meat Cutter’s Union Local 534, where he had served as an officer for 34 years before his retirement in May 1985. He was a past administrator of Local 534’s meat and grocery pension plans and health and welfare plans, as well as past president and treasurer of the A.M.A.L. 534 Credit Union. Mr. Hoff was also a member and trustee of Meat Cutter’s Union Local 534 Retiree’s Club.

Upon returning from military service, Norm married the love of his life, Elma Mae Tuerck, on June 15, 1946. This happy, loving marriage produced five children. Norm had a deep love for his family, which was his life.

The Hoff family would like to extend their gratitude to Family Hospice and Home Instead Senior Care. Nurse Tammy and caregiver Aisha are truly wonderful people who brought care, compassion, and love to Norman in his final days.

In lieu of flowers, memorials may be made to St. Jude Children’s Research Hospital, Shriner’s Hospital for Children, or Family Hospice. Condolences may be expressed to the family online at www.rennerfh.com.

Visitation: Friends may visit with the family from 4 to 8 p.m. Thursday, September 8, 2016, at George Renner & Sons Funeral Home, Belleville, IL. A VFW ritual will be held at 7 p.m. Thursday at the funeral home.

Norm and I met when we went to ww2 memorial Washington,d.c.together.it was a wonderful memory in my life and I hope it was to him as well! What wonderful friends norm and Elma became. I will miss my old friend.rest in peace norm.we love you!

Norman and I worked together for
For years. He was a dear man and will be missed. R.I.P.