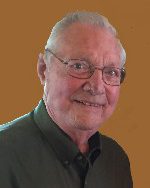 Mr. Maul was an insurance claims adjuster and partner in the Lynch, Boyer & Maul Insurance Company before his retirement.  He was a member of St. Augustine of Canterbury Catholic Church and belonged to the Holy Name Society at the church. Later, he was a member of St. Henry Catholic Church, Belleville, IL. Norman was a World War II U. S. Navy veteran.

He was preceded in death by his wife of 49 years, Dorothy J., nee May, Maul, whom he married on January 24, 1948, and who died on April 14, 1997; his parents, Albert and Susan, nee Goodnight, Maul; five brothers, Albert Maul, Harry Maul, Verlin Maul, Walter Maul, and Fr. William Maul; and two sisters, Marjorie Henchel and Laverne Sellier.

The family would like to extend a sincere thank you to the staff of Morningside of Shiloh and of Memorial Hospital East, for the excellent care and compassion shown to Norman.

Burial with military honors will be at Valhalla Gardens of Memory, Belleville, IL