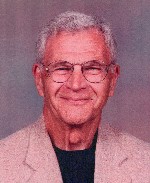 Norman was an avid sports fan, he enjoyed watching all sports. Norman also was very active with Khoury League in its early years, enjoyed playing golf, and could be found at the stock car races on the weekends.

In lieu of flowers, memorials may be made to the Belleville Area Humane Society or to the American Cancer Society.  Condolences may be expressed to the family online at www.rennerfh.com.

Funeral:  A Mass of Christian Burial will be at 10 a.m. Saturday, February 4, 2017, at St. Peter’s Cathedral, Belleville, IL, with Msgr. John Myler officiating.

Mark, Linda & Casey: We are so sorry to hear about Norm. He was a great guy and I will always remember going back to the house on Menard Street after the races and enjoying your parents. Thanks for the great memories Norm.
Gary & Sharon Groom

Deepest Sympathy to the entire Schaefer Family on the loss of Norman. Terry and Bev Knoth