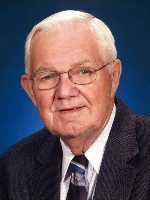 Norman, founder of the long-standing metro east window and door company, Wilke Window & Door, Inc., grew up in the small town of St. Libory, IL. He enlisted in the U.S. Army on November 4, 1952, at age 20, and was a veteran of the Korean War.

Norman was honorably discharged from the Army in 1954, after serving two years in the 4th platoon as a 114th Graves Registration Quartermaster, to go home and marry his sweetheart, Dorothy, on January 11, 1956.

In 1962, Norman started a small, one-man operation installing screen doors in addition to his full-time job at Swift Packing Company in East St. Louis, IL. He eventually grew his sideline business into one of the largest window and door dealerships in the Metro St. Louis area – Wilke Window & Door Co., Inc.

Norman decided to semi-retire in 1991 but continued to work alongside his son at the family business. Later, he started a separate division of Wilke Window & Door called Norm’s Bargain Barn, selling discount windows, doors and cabinetry. He oversaw the operations of Norm’s Bargain Barn, often working 40+ hours per week into his 90’s.

Norman loved his family. He was dedicated to hard work and was genuinely interested in the needs of his customers and employees. He was well known in Shiloh and the surrounding areas both for his character and his “pet” Clydesdale horses that he raised and displayed at many area parades and events through the years.

The family would like to thank Nina Dorsey for her assistance and exceptional nursing care.

In lieu of flowers, memorials may be made to St. Teresa School in Belleville, IL or to ProMedica Hospice, Condolences may be expressed to the family online at www.rennerfh.com.

Burial with military honors will be held at Mt. Calvary Cemetery, Shiloh, IL