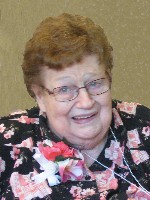 Mrs. Bender was raised in Collinsville, IL, and graduated from Collinsville High School.  Upon marrying Carl in 1954 she became an Air Force wife, raising four children while moving every two to three years, and enduring long periods of unaccompanied tours of duty by Carl.  She was active in the Officer’s Wives Club at Scott AFB as well as Travis AFB, CA, where she learned to play mahjong. She lived from the desert of Southern California to the humidity of South Carolina.  Upon Carl’s retirement from the Air Force the family moved back to the Belleville area and made a permanent home. Through it all Eloise was happiest at family gatherings.

She was preceded in death by her husband of 56 years, Carl A. Bender, whom she married on January 10, 1954, and who died June 30, 2011; her parents, Paul D. and Olga L., nee Porterfield, Jennings; a brother, Robert Jennings; a son-in-law, Leonard Bafia; a sister, Nancy (Bill) Heidelberg; a sister-in-law, Bernice (Harold) Brettschneider; and a brother-in-law, Raymond (Jutta) Bender

The Bender family would like to give special thanks to the extended family at Cedarhurst of Shiloh Memory Care, including, Ruth Knerrer, Ericka Pickens, Dawn Heimann, Rachel Pollmann, all the CNA’s, and Nancy Fritz.

Memorials may be made to Cedarhurst of Shiloh Memory Care. Condolences may be expressed to the family online at www.rennerfh.com.

Janet & family,
We were very sorry to hear of your mom’s passing. God bless & keep you all.

our sincere sympathy to all the Bender family for the loss of your dear Mom and Len’s wonderful mother-in-law. Wally & Barb Bafia

Janet and Family, No matter the circumstances, it is never easy to lose a family member. Know you are in my thoughts and prayers.

Eloise Bender Family & Friends. So sorry for your loss. May God grant you the love of Family and good will of Eloise and may He bless you all with sweet memories of Eloise & Carl during this difficult time.

Eloise Bender Family & Friends. So sorry for your loss. May God grant you the love of Family and good will of Eloise and may He bless you all with sweet memories of Eloise & Carl during this difficult time.

Deepest Condolences from a party that from 1940 lived across the street, and as well from 1947 worked for Jennings at Swift.

OUR SYMPATHY TO YOU ON THE LOSS OF YOUR MOTHER. WE REMEMBER YOU CHILDREN WHEN YOU LIVED WITH YOUR GRANDPARENTS ON STATE STREET FOR A SHORT TIME. WE WERE NEIGHBORS