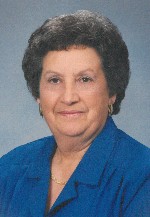 Orene worked at St. Elizabeth’s Hospital as a housekeeper before her retirement.  She was a member of St. Teresa Catholic Church.

She was preceded in death by her husband of 30 years, Fred J. Sudheimer, whom she married in September 1947 and who died on December 5, 1977; her parents, Otto B. and Clara M., nee Hoffarth, Friederich; four sisters, Stella Friederich, Edna Friederich, Verena Friederich, and Irene Schmidt; and two brothers, Alvin Friederich and Raymond Friederich.

She is survived by many nieces and nephews.

In lieu of flowers, memorials may be made in the form of masses. Condolences may be expressed to the family online at www.rennerfh.com.