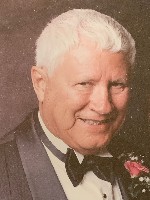 He was preceded in death by his wife of 62 years, Ethel C., nee Pour, Masterson, whom he married on November 11, 1952, and who died on June 10, 2015; a grandson, in infancy; his parents, Edward and Frances, nee Kettman, Masterson; six sisters, Adrain, Evelyn, Serena, Gloria (Fred) Bertelsman, Alice Deterding, and Helen (Ed) Schumm; and a brother, Edward (Helen) Masterson.

Memorials may be made to Belleville/Fairview Heights Kiwanis Club or to the charity of the donor’s choice. Condolences may be expressed to the family online at www.rennerfh.com.

Visitation:  Friends may visit from 4 to 8 p.m. Thursday, October 8, 2020, at George Renner & Sons Funeral Home, Belleville, IL.  Standard CDC guidelines, including masks and a limited number of visitors at any one time will be observed.

Funeral: A private family Mass of Christian Burial will be held Friday, October 9, 2020.

Burial with military honors will be at St. Augustine of Canterbury Cemetery, Hecker, IL.