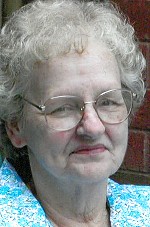 Patricia grew up in Belleville, IL, attended St. Peter’s Cathedral Grade School, and went on to graduate from the Academy of Notre Dame in 1951.  On April 30, 1955, she married the love of her life, Victor J. Francoeur from Nashua, New Hampshire, who had been serving locally in the United States Air Force.  They married at St. Peter’s Cathedral Catholic Church in Belleville, IL.  The happy couple settled in Belleville and started a family in 1956.  Patricia worked at Bell Telephone Company after high school and then at Scott Air Force Base, IL, as a telephone operator.

Soon after starting a family, Patricia devoted her days and nights to her family.  She raised six children and supported St. Peter’s Cathedral church and school as a volunteer.  She was a member of discussion groups at the church.  Patricia enjoyed athletics, was an avid St. Louis Cardinals fan, and the biggest fan at her children’s and grandchildren’s sporting events.  She also enjoyed bowling and playing cards.

Patricia was preceded in death by her parents, Fred and Paula, nee Weirauch, Schaefer; her sister, Rita Bell; a grandchild, Kendall Delk; and a beloved niece, Janet Palmeri.

The family wishes to thank the employees of Hospice of Southern Illinois and other parties who helped care for Patricia in her final months.

In lieu of flowers, memorials donations may be made to Hospice of Southern Illinois, 305 S. Illinois St., Belleville, IL  62220.  Condolences may be expressed to the family online at www.rennerfh.com.

Funeral:  A Mass of Christian Burial will be held at 10 a.m. Monday, February 29, at St. Peter’s Cathedral, with Msgr. John Myler officiating.  Burial will follow at Valhalla Gardens of Memory, Belleville, IL.

I am very sorry for your loss. Losing a loved one in death is such a difficult thing to experience. Please be comforted by the promises in the Bible. At John 5 : 28, 29 Jesus tells us that all those in the memorial tombs will hear his voice and come out. What a loving provision put in place by the God of all comfort so we can have the assured hope of seeing our dead loved ones live again one day. Meanwhile as I pray for that day to come I ask God to bless your family and give each of you the strength to endure this most trying time.

Dear Vic and Family – Sorry to hear of your loss of Pat. Her picture brought many many memories back of our high school days and working days at the phone company. Please know my thoughts and prayers are with during this time.