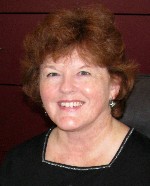 Mrs. Osborn worked as the office manager at George Renner & Sons Funeral Home for many years. She was a member of St. Peter’s Cathedral Catholic Church, Belleville, IL, a 1962 graduate of Cathedral Grade School, a 1966 graduate of the Academy of Notre Dame, and a 1970 graduate of Bradley University, Peoria, IL.  Pat was an English teacher for several years at Althoff Catholic High School in Belleville and helped in her family’s business, Wessel’s Market. She was a loving daughter, wife, mother, grandmother, aunt, and friend.

Pat was a perfectionist and wanted every detail to be correct and “in order”.  But more than anything, Pat was about family.  She worked hard at organizing get-togethers for many occasions with lots of good food, especially her famous potato salad and desserts, and of course, lining everyone up for PICTURES.  Grandkids were always made to feel extra special at Christmas and Easter.  Pat always remembered birthdays and anniversaries of family members.  She will be deeply missed.

Pat was preceded in death by her father, Hugo M. Wessel; a brother, Robert Wessel; and a nephew, Wade Blouin.

Surviving are her husband of 46 years, William Floy Osborn, whom she married on October 23, 1971;