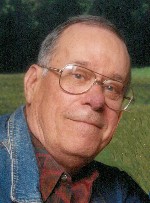 Our dad had dementia and had declined slowly finally succumbing to pneumonia.  If you only knew him in the past few years, you didn’t really know him at all.

When he was younger, before his brain tumor and 2 brain surgeries, dad was a vigorous man.  He co-owned Swansea Concrete Products with his father and brothers and did a lot of physical labor running the production side of the business making concrete blocks.

Dad loved music and loved to sing.  He was a member of several choirs beginning with the choir at Cathedral Catholic Grade School and continuing throughout his life at every parish he belonged to including St. Patrick’s Catholic Church in East St. Louis and Blessed Sacrament in Belleville.

Best childhood memories are going camping with dad at Camp Ondessonk, especially over the Labor Day weekend.  Dad served on the Board of Directors for Camp for several years and participated in many building projects at Camp.  He knew a lot about construction and could fix most anything and dispensed the most practical of advice.

Dad had a good sense of humor.  He enjoyed a good (sometimes off color) joke and loved reading the comics in the newspaper.  Even after he lost the ability to read with comprehension, he still smiled or laughed when we read the funny papers together.  He was a veteran of the Army and served during the Korean War in Germany.  Dad enjoyed watching the St. Louis Cardinals and football games on TV.

He was preceded in death by his wife of 64 years, Marilyn A., nee Schaefer, Fournie, whom he married on August 23, 1952, and who died on October 28, 2016; one son, Carl G. Fournie; one daughter, Patricia Fournie Thayer; one granddaughter, Jessica Hatcher; two grandsons, David Hatcher and Winston Fournie; his parents, Fred and Rosalia, nee Fellner, Fournie; and a brother, John Fournie.

Many thanks to the staff at The Arbors in Fairview Heights for the excellent care they provided Dad these past few months, especially after mom died.

Memorials may be made to Camp Ondessonk or the Illinois Center for Autism.  Condolences may be expressed to the family online at www.rennerfh.com.