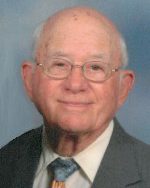 Mr. Heimrich was a retired farmer and was a truck driver. He drove a tractor for Eckerts Country Store for several years. He enjoyed playing euchre and pinochle with family and friends.  He was an avid fisherman and hunter, and was a proud gardener.  His name is in the Bowling Hall of Fame for bowling a perfect 300 game. Paul enjoyed pitching horseshoes and trap shooting.  He was a member of the local Moose organization, the retired teamers Local 50, a member of Elkhorn Hunting and Fishing Club, and for ten years served on the Freeburg High School Board of Education.  Paul was a member of Saint Liborius Catholic Church, St. Libory, IL. He always enjoyed time with family and friends, especially his grandchildren.

He was preceded in death by his wife of 73 years, Rose A., nee Bozsa, Heimrich, whom he married on August 9, 1944 and who died on August 27, 2017; his parents, Joseph and Cecilia, nee Rutz, Heimrich; a daughter and son-in-law, Jeanne (Darrell) Guebert; a sister, Arlene Zimmerman-Leard; a son-in-law, Todd Breitwieser; a granddaughter, Deanna Gavin; and numerous brothers-in-law and sisters-in-law.

Memorials may be made to Saint Liborius Catholic Church or to Freeburg Care Center.  Condolences may be expressed to the family online at www.rennerfh.com.