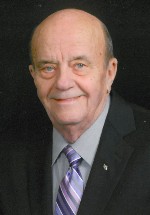 Mr. Seibert was the Superintendent of Maintenance for the St. Clair County Highway Department before his retirement. He was a St. Clair County Board Member and served as a City of Belleville Alderman for 39 years. Paul was a member of Union United Methodist Church, Belleville, IL, and a member of the Masonic Ainad Temple.

He was preceded in death by his wife of 64 years, Dixie M. Seibert, nee Johnson, whom he married on January 12, 1953, and who died on February 7, 2017; a daughter, Debra “Debi” Jo McWhorter; a son in infancy, Paul Seibert III; his parents, Paul A. and Arlene E., nee Klemme, Seibert; and a brother, Edward Seibert.

In lieu of flowers, memorials may be made to Shriners Hospitals for Children – St. Louis. Condolences may be expressed to the family online at www.rennerfh.com.