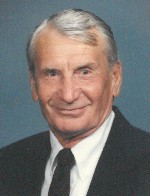 Mr. Bruno retired from Carpenters Local 169, East St. Louis, IL, after 50 years of service.  He was a member of St. Henry’s Catholic Church, Belleville, IL.  Pete was a World War II U.S. Army Air Corps veteran, serving in a special operations unit under General Patton in Italy and North Africa.  He was a loving husband, father, grandfather, and great-grandfather, and he will be dearly missed by his family.

Pete was preceded in death by his father, John Bruno; his mother, Rose, nee Gedda, Craft; and a brother, Nick Bruno.

In lieu of flowers, memorials may be made to Hospice of Southern Illinois, 305 S. Illinois St., Belleville, IL  62220, or to St. Jude Children’s Research Hospital, 501 St. Jude Place, Memphis, TN  38105.  Condolences may be expressed to the family online at www.rennerfh.com.