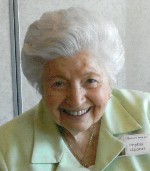 Mrs. Lippert was a homemaker and a great cook. She was a member of St. Paul United Church of Christ, Belleville, IL.  Phyllis was an avid bridge player and was a member of the Thursday Literary Club, and the Belleville Women’s Club.

She was preceded in death by her husband, Floyd C. Lippert, whom she married June 18, 1949, at St. Paul’s United Church of Christ in Belleville, and who died October 30, 2014; her parents, Armin and Lela, nee Shelton, Keck; a granddaughter, Jodie Leigh Lippert; three sisters, Wanda, Helen, and Anita; two brothers, Robert and Armin; and a brother-in-law, Howard (Harriet) Lippert.

Memorials may be made to Hospice of Southern Illinois or to St. Paul United Church of Christ, Belleville, IL.  Condolences may be expressed to the family online at www.rennerfh.com.

Funeral:  Funeral service will be held at 11 a.m. Wednesday, July 5, 2017, at the funeral home, with Rev. Herbert Schafale officiating. Private Entombment will be at Valhalla Mausoleum, Belleville, IL.