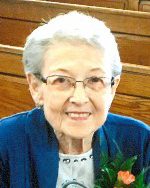 Mrs. Lotz was a member of St. Luke’s Catholic Church, Belleville, IL, and belonged to the quilting group at the church.

She was preceded in death by her husband, Orville Lotz, whom she married on May 2, 1953, and who died on August 19, 2005; her parents, Leonard and Florence, nee Kurtz, Amann; two brothers, Robert Amann and Russell Amann; and a son-in-law, Donald C. Voegele.

In lieu of flowers, memorials may be made to the Catholic Ministry to the Sick and Aged or to Hospice of Southern Illinois. Condolences may be expressed to the family online at www.rennerfh.com.