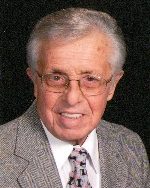 He was born on August 12, 1937 in LaSalle, IL.  After graduating from LaSalle-Peru High School in 1955, he attended LaSalle Peru Junior College and the University of Illinois.  He graduated at the top of his class from John Marshall Law School in Chicago in 1961.

Shortly thereafter, he began practicing law in Belleville and continued practicing part-time up until his death.  He fought hard for his clients and never hesitated to help anyone who needed legal advice.  In addition to his law practice, he worked briefly as an Assistant State’s Attorney and an Assistant Public Defender.  He served for many years as school board attorney for Belleville Township District #201, O’Fallon District #203, Central District #104, Pontiac-William Holliday District #105, and High Mount District #116.

In his leisure, Ralph greatly enjoyed swimming and relaxing poolside in the summer sun. He looked forward to his 40-year tradition of annual trips to Las Vegas with his brother Marius and long-time friends. He relished his time courting Lady Luck at Lumiere Casino with his good friend Dennis Watkins. More than anything, he treasured the time spent with his grandchildren, and took great delight in attending their school events, athletic endeavors and performances.

He was preceded in death by his parents, Ralph and Lena, nee Ruggerio, Derango, and his brother, Marion Derango.

In lieu of flowers, memorials may be made to St. Jude Children’s Research Hospital or to the Shriner’s Hospital for Children.  Condolences may be expressed to the family online at www.rennerfh.com.

Private family burial will be at a later date.