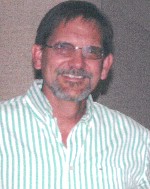 Mr. Karfs was a veteran of the United States Navy and after serving six years, began his 40-year career as an ultrasonographer with John Cochran Hospital in St. Louis, MO.

Randy enjoyed playing softball, countless rounds of golf with his friends, sharing music with everyone, and hosting his Christmas party.  He especially loved running and participated in over 26 half-marathons.

Randy was preceded in death by his parents, Francis Herman and Betty Ann, nee Friedli, Karfs; and a brother, Michael Karfs.

Surviving are wife of 36 years, Patricia Ann, nee Heilich, Karfs, whom he married on August 27, 1983; a son, Jeremy(Mia) Karfs; a daughter, Amy (Evan) Zaggy; a grandson, Benjamin Randy Karfs; and his faithful dachshunds, Wally and Penny. Randy is also survived by his siblings, Craig, Linda, and Todd Karfs; dear brothers-in-law and sisters-in-law; nieces and nephews.

In lieu of flowers, memorials may be made to the Alzheimer’s Association or to the Dachshund Rescue of St. Louis. Condolences may be expressed to the family online at www.rennerfh.com.

Service: A Mass of Christian Burial will be held at 10:30 a.m., Monday, July 13, 2020, at St. Augustine of Canterbury Catholic Church, with Msgr. William McGhee officiating. Standard CDC guidelines will be in place upon entrance.