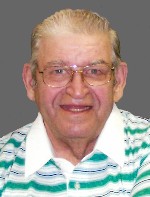 Ray retired from the City of Belleville as the director of the Sanitation and Health Department on March 22, 1991, after 31 years of service.  He and his late wife, Alice, owned and operated Alice’s Place on North 11th Street in Belleville.  It was the meeting place for Stag Brewery workers, hunters, and fishermen to tell stories of their trophies.  It also served as a meeting place for politicians from local communities.  Good food and fun times were always had at Alice’s.

Ray enjoyed hunting every kind of animal, including deer, antelope, rabbit, squirrel, duck, bear, moose, and geese.  He had equipment for all kinds of hunting.  He traveled to Europe, to South America for geese, to Alaska for bear, to Canada for moose, or anywhere else a friend wanted to hunt. Whenever possible, Ray would hunt with his brothers and even taught his younger brothers where and how to hunt.  He also loved fishing and would often travel a great distance to catch fish and then host a fish fry at Alice’s for all of his friends.  Ray organized Alice’s Shooting Club and was a member of the National Rifle Association (NRA) and Ducks Unlimited.

Visitation: Friends may visit with the family from 4 to 7 p.m. Monday, March 28, 2016, at George Renner & Sons Funeral Home, Belleville, IL.

Funeral:  Funeral services will be held at 7 p.m. Monday, March 28, 2016, at the funeral home with Rev. Gregory Bouck officiating.  Entombment will be Tuesday, March 29, 2016, at Valhalla Gardens of Memory Mausoleum.

We at Miscellanea House were deeply saddened by Ray’s death.

Our thoughts and prayers are with you. We are so sorry for your loss.

We were very sorry to hear of Raymond’s passing. Our thoughts and prayers are with you. Please except our sympathy. Sincerely, Mark & Kim Forcade

To Wayne, I’m very sorry to hear about your brothers. Love, Sharon