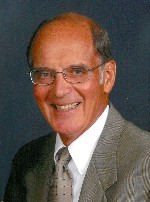 Lt. Col. Martinich honorably served his country for 25 years in the United States Air Force.  He was a navigator for 16 years, which included four years as a Navigator Instructor at the United States Air Force Academy, and nine years as a Personnel Planning and Programming Officer at the Military Airlift Command (MAC) Headquarters, Scott AFB, IL, where he retired in 1988.

Soon after retirement, Ray went to work for Trans World Airlines (TWA) as an L-1011 Pilot Instructor and he continued with American Airlines as a Manager, Flight Operations until retiring again in 2004.

Ray was a member of St. Peter’s Cathedral, Belleville, IL, where he coordinated and volunteered at the annual Wurstmarkt and enjoyed decorating the church for holidays.  He enjoyed spending time with his grandchildren and will be remembered for his love of family and friends.

A special thank you to the First Responders, ER staff at Memorial-East Hospital, ARCH Air Medical Services Personnel, and the 10th floor Neurology ICU at Barnes-Jewish Hospital for their professional and compassionate care.

In lieu of flowers, memorials may be made to St. Peter’s Cathedral, Belleville, IL. Condolences may be expressed to the family online at www.rennerfh.com.

Funeral:  A Mass of Christian Burial will be celebrated at 11 a.m. Friday, February 23, 2018, at St. Peter’s Cathedral, Belleville, IL, with Monsignor John T. Myler officiating. Burial will be private.