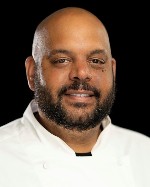 Raymond was well known for his impact on the culinary profession in both St. Louis and Chicago.  His career spanned eighteen years, including working for one of the top-rated restaurant groups in Chicago; a top gaming establishment in the Metro St. Louis Region; and the most prominent caterer in Metro St. Louis.  Most recently, he served as General Manager and Executive Chef at Beffa’s Bar & Restaurant in midtown STL.  Ray was known as a fun-loving leader who created enthusiastic and productive kitchens. He could often be found starting a dance party in the kitchen and made a point of personally visiting every table in the restaurant as much as possible. He will be missed throughout the culinary world.  In the words of Cesar Chavez, “the people who give you their food give you their heart.”  Saying that Ray was the life of the party is not an exaggeration – he brought the party to every gathering, large or small.   He had the slickest dance moves, the best playlists, and the deepest dimples.  When you became Ray’s friend, you became a friend for life.

He was preceded in death by his paternal grandfather, George Wiley; his maternal grandparents, Mark and Jacqueline, nee Alexander, Trenier; two uncles, Milton Wiley, and John Michael Trenier; and an aunt, Darlene Wiley.

In lieu of flowers, memorials may be made to Gateway180 https://gateway180.salsalabs.org/websitedonations/index.html  Condolences may be expressed to the family online at www.rennerfh.com.

Visitation: Friends may visit the family from 10 a.m. to 12 noon Friday, January 21, 2022, at Our Lady Queen of Peace Catholic Church, Belleville, IL.