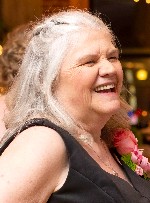 It’s impossible to summarize a life in a few simple words, especially a life as full as Rebecca’s. An exceptionally kind, brave, smart, hardworking, and loving wife, mother, sister, and friend.

Always a strong advocate of education, Rebecca earned her bachelor’s degree from Southern Illinois University (SIU) in early childhood education.  She began her career managing childcare centers and transitioned into public service, working to help victims of domestic violence receive their education.  The majority of her career was devoted to working in alcohol and drug prevention, writing grants, educating on the dangers of substance abuse, and she retired in 2012 as an addiction counselor.  Rebecca was passionate about her work and the individuals she helped as she had supported her husband in his journey to sobriety.

She married the love of her life, Glen, in 1985 and they had two daughters. She was an exceptional mother and grandmother, known for her ability to comfort and console.  She was a proud mother, always bragging on her girls.  She was a devoted wife who loved and cared for her husband deeply. When he was placed on hospice in September of 2017, she slept on a couch next to his bed every night, for seven months, to stay close to him.

Rebecca was known for her friendliness, kindness, and generosity.  Rebecca never met a stranger, happy to talk or engage with anyone, anywhere. She treasured her friendships and had several which lasted decades.  Her kindness was exemplified in her faith.  She was a woman of steadfast faith with a servant’s heart.  She was an elder at Westminster Presbyterian Church in Paducah, KY and was heavily involved in church activities until moving to Belleville, Illinois to be with her daughters.

After retirement, she enjoyed spending time with her family and friends, and caring and bonding with her great-nieces, Harper and Arie, and great-nephew, Tyler. She also enjoyed watching television, discussing politics, overfeeding her beloved pets, taking daily walks, and being the best “Gaga” for her granddaughter, Charlotte.

Rebecca will be remembered for her kindness, unconditional love, and her infectious smile.

She was preceded in death by her mother and father, Christine and Guy Adams; her husband, Harrell “Glen” McQuage; a brother, Jonathan David Adams; and a sister, Emma Hicks.

Floral donation in Rebecca’s honor may be sent to Joppa Missionary Baptist Church, Joppa, IL. Condolences may be expressed to the family online at www.rennerfh.com.

Funeral: A memorial service will be held at 12 p.m. on Saturday, January 21, 2023, at Joppa Missionary Baptist Church, Joppa, IL, with luncheon immediately following.