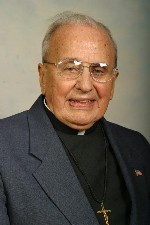 He began his education at the St. Henry’s Preparatory Seminary in Belleville, IL, and the St. Peter’s Oblate Novitiate at in Mission, TX.  He was sent to the Gregorian University in Rome, where he obtained his PH.L in 1939.  He came home to Evansville, IL for his Ordination by Bishop Henry Althoff on September 20, 1941. In 1943, he finished his Sacred Theology Licentiate in Ottawa, Canada and in 1945 he proceeded to the University of Chicago and in 1947 received his Master’s Degree at the Catholic University in Washington DC. He was also fluent in French and Italian.

His first assignment was to be an instructor at St. Henry’s Preparatory Seminary in Belleville, IL, until 1952. He then founded Christ the King Retreat Center in Buffalo, MN. He served as the Mission Procurator and Secretary to the Provincial Superior in St. Paul, MN. He was then assigned to the Oblate Western Province based in Oakland CA, where he stayed until 1959. He returned to St. Paul as Mission Procurator until 1962.

In 1972, Fr. Boni founded the Radio Information Service for Blind and Handicapped (now “MindsEye”) based at Our Lady of the Snows Shrine in Belleville IL, and served as director until 1975.  He became the Radio Information Service Development Director until 1984. He also organized Friends of Eye Research. In 2000, he was named in “Who’s Who in America” and was awarded the Vision Award (The Agrama Harmony Gold and Light Award) by the Retinitis Pigmentosa International, for his tireless work with the Blind and visually impaired. In 2009, Fr. Boni lost his sight and retired to the Apartment Community in Belleville, IL where he resided until his death.

He was preceded in death by his parents; his sisters, Wilma Kumke, Florentine Froelich, Eleanor Jackson, Sr. Dorine Wittenbrink, FSM, and Agatha Harst; and his brothers Cletus, Raymond, and H.J. Wittenbrink.

He is survived by nieces and nephews.

In lieu of flowers, memorials may be made to MindsEye or to the Missionary Oblates of Mary Immaculate.

Funeral:  A Mass of Christian Burial will be held at 10 a.m. Tuesday, June 20, 2017, at the Church of Our Lady of the Snows, led by Fr. Louis Studer, OMI and with Fr. Allen Maes, OMI preaching. Burial will be at St. Henry’s Oblate Cemetery in Belleville.