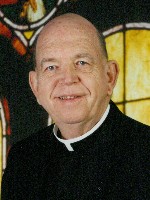 Fr. Jeffrey was ordained a Roman Catholic Priest for service to the Diocese of Fargo, ND, on May 30, 1959. His first assignment was to St. John the Evangelist Parish and St. Joseph Hospital as chaplain, both in Grafton, ND, from September 1, 1959 to August 31, 1964.

Following this initial ministry assignment, his bishop and diocese released Fr. Jeffrey to join the Apostolate of the Missionary Society of St. James for service in Latin America and the people of Peru.  For 22 years, until September 14, 1986, he had the privilege of serving the people of Peru, South America.

Fr. Jeffrey retired from formal ministry on July 1, 1999.  He then moved to Belleville, IL, to be near his sister.  Eventually he resided at the Hincke-Sense Residence for Retired Priests in Belleville, IL.  With continuing passion to be involved with service to the people of God, especially Hispanic/Latin heritage, Fr. Jeffrey quickly became an integral member of the Hispanic Ministry of the Catholic Diocese of Belleville, IL.  While he primarily served the Hispanic population at Damiansville, IL, (St. Damian’s Parish) Clinton County, IL, and surrounding counties, he also traveled throughout Southern Illinois (Shawneetown, Cobden, Fairmont City, etc.) to bring the Eucharist, and the compassion, mercy, dignity & respect, and God’s forgiveness through his presence and Sacramental ministry of the Catholic Church.  This continued until his physical strength declined.

Memorial gifts may be made to the Catholic Diocese of Belleville’s Office of Hispanic Ministry, 2620 Lebanon Avenue, Belleville, IL, 62221 or to the charity of the donor’s choice, and will be received at the church.  Condolences may be expressed to the family online at www.rennerfh.com.

Visitation:  Visitation for James Jeffrey, whose body will be received at St. Damian Church, Damiansville, IL, on Thursday, June 1, at 5 pm, will be from 5 to 7 pm.

Funeral: The Rite of Christian Burial will be celebrated in Spanish at St. Damian Catholic Church at 7 pm.  Principal celebrant and homilist will be Msgr. Vincent Haselhorst.

Burial will be at a later date in St. Bridget Cemetery, after a Mass of Christian Burial at St. Bridget’s Catholic Church, Cavalier, ND.

To Jack, Jill, Anne, David,Mark,Michael,Peggy, Judi, and Christi:
How your Uncle loved you all, and was so delighted to be invited to family functions!
I was so happy to hear that he had visitors towards the end to keep him company.
My Mom, Madeline Nagle, was your Uncle’s cousin, and after she passed in 2012, I decided to take her place in their monthly phone calls. Your Uncle Jim was my Godfather.
We always had such great conversations and could make each other laugh.
I am glad your Uncle has finally passed to the Heavenly Kingdom to be reunited with our Lord.
He was a very special person, and I know I was blessed to know him.
My deepest sympathies,
Dee Dee Latshaw

Dear family of Fr. Jeffrey, Please know that he influenced my life as he began ministry in Grafton, ND. He was so much fun, interested and loving people, and encouraged all of us to extend God’s kingdom with all the gifts and talents we have. (My ministry with Latinos even til now is the result of that mentoring.) All our family loved him and through the years would share conversation about how he affected our lives. And I’ve heard the same from classmates and so many people from Grafton. (While he ministered in Peru following the Sunday mass the custom in the parish was to kneel down and pray an our father, hail mary and glory be for him.) We thank you, loving God, for the gift of Fr. Jeffrey. May you hold him lovingly now and set him free to laugh and praise with all our saints who have gone before us!

Father has been my hero since I was nine years old in 4th grade. He lived the love of God. Through my religion classes he taught, by his living example, in song as director of the youth & adult choirs in Grafton, his sense of humor plus a hearty laughter are a few of the reasons I can truly call him my life-long hero. Father Jeffrey inspired me to learn Spanish, to work with and to know so many beautiful Hispanic persons. Thus I went on to teach Spanish and still speak it today.
Communication with him thru all those years of ministry in Peru deepened our friendship. When I visited with him in Feb 2017, he delivered a beautiful Spanish blessing over me. I will always treasure that blessing, our visit, and our friendship. His soul is at peace. God bless his nieces & nephews. Peggy, it was a pleasure to meet you. My sympathies to you.

Jim Jeffrey worked in Chimbote, an eight hour drive north of Lima. He was a warm, happy human being, with a solid faith in the God of Love and of Life. He willingly shared his faith with all. Everyone who met him went away with a smile on their faces and joy in their hearts. He was a great colleague, a wonderful companion and always ready for some fun.

He lived through the earthquake of May 31, 1970, which had Chimbote at its epicentre, and which claimed the lives of 80,000 people. Like all of us who joined the St. James Society, the people of Latin America “stole” his heart. So much so that on his return to the USA he did not return immediately to his home Diocese, he continued working with the Hispanics. He loved the people and they took him to themselves,

He now is at rest with the God he loved and served so well. Descansa en paz, amigo bueno y fiel.