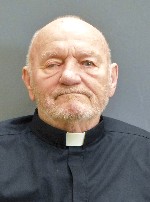 Fr. Kabat was born to the late Nick and Anna (Skorczewski) Kabat in Scheller, IL, on October 10, 1933. He professed his first vows as a Missionary Oblate of Mary Immaculate in 1957 and was ordained to the priesthood in 1959.

His first ministry assignments were in Minnesota and Illinois, as well as in the Philippines and Brazil. Early on in his priestly ministry, he heard a call to be a prophet against the proliferation and potential use of nuclear weapons. He took seriously Pope St. John XXIII’s statement in his Encyclical “Pacem in Terris” (1963): “Hence justice, right reason, and the recognition of man’s dignity cry out insistently for a cessation to the arms race. The stockpiles of armaments which have been built up in various countries must be reduced all round and simultaneously by the parties concerned. Nuclear weapons must be banned. A general agreement must be reached on a suitable disarmament program, with an effective system of mutual control.” (Par. 112) Carl lived to know that Pope Francis stated in 2019 at Hiroshima, Japan: “With deep conviction I wish once more to declare that the use of atomic energy for purposes of war is today, more than ever, a crime not only against the dignity of human beings but against any possible future for our common home.  The use of atomic energy for purposes of war is immoral, just as the possessing of nuclear weapons is immoral, as I already said two years ago.” Carl also took to heart the Constitutions and Rules of the Missionary Oblates: “Action on behalf of justice, peace and the integrity of creation is an integral part of evangelization.” (Rule 9a)

Carl was willing to put his own freedom on the line in order to get this message across to governments and individuals. As a result of various actions of civil disobedience, he spent 17 years in federal prisons, seeing those judicial sentences also as a way of being a prophet of peace. He lived for several years at the Karen House Catholic Worker community in St. Louis. The Catholic Worker movement was founded by Servant of God Dorothy Day.

Fr. Kabat was preceded in death by his parents and by his brothers, Paul, Robert and Leonard Kabat. Surviving him is his sister, Mary Ann Radake of Dubois, IL, as well as nieces and nephews. He is also in the prayerful remembrance of his approximately 3500 fellow Oblates of Mary Immaculate in over 60 countries.

In lieu of flowers, donations for the Missionary Oblates of Mary Immaculate would be greatly appreciated. Condolences may be expressed to the family online at www.rennerfh.com.