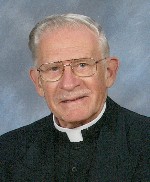 Fr. Blaes was ordained to the Catholic Priesthood on May 26, 1956.  Among his many assignments, Fr. Blaes was the founding principal of Mater Dei High School in Breese, IL, in 1958, and later was the founding principal of Althoff Catholic High School in 1964.  He served as Director of Guidance at two separate high schools in Colorado for 15 years. He was the longest serving counselor at Northglenn High School, Northglenn, CO.   Upon returning to Illinois, Father served as Principal at St. Paul High School, Highland, IL, Counselor of Griffin High School, Springfield, IL, and Director of Education at St. Mary’s Catholic Grade School, Centralia, IL.  Father was an adjunct Professor of Education at McKendree University, Lebanon, IL, from 1997 to 2000, then served as Pastor of St. George Catholic Church, New Baden, IL, from 2002 to 2006.

With a love for learning, he shared his many talents with students, not only in Illinois and Colorado, but in California as well.  Father taught thirteen different Psychology courses at Southwestern Illinois College in Belleville, IL, and was a part-time counselor there for 17 years.  He retained contact with many former colleagues and students throughout the years.

A writer of some note, he put together a program called Guaranteed Graduates which proposed to guarantee that high school graduates could do what was expected of them when entering college.

Father Blaes was preceded in death by his parents, Otto J. and Malinda, nee Jung, Blaes; and a brother, Robert O. Blaes.

Memorials may be made to the Hincke-Sense Home for Retired Priests or to Althoff Catholic High School.  Condolences may be expressed to the family online at www.rennerfh.com.

Funeral: A private graveside service will be held. A Mass of Christian Burial will be held at a later date.