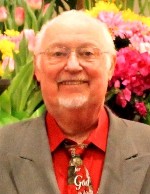 Print Obituary
The family of the Rev. Dr. Arthur Tinge celebrates his life and his legacy of love for God and family that he showed over the course of his 81 years. Born on August 4, 1934, in St. Paul, MN, he had plans of being a draftsman and engineer. God, however, had a higher calling for him.

Together with his late wife Suzanne and sons Steven and Andrew, later to be joined by sons Jonathan and Philip, he embarked on a journey in the pastoral ministry that lasted more than 50 years, the last 37 of which were spent at Christ United Church of Christ in Belleville.

The family grew to include daughters-in-law Sue, Lisa, and Kim, although the “in-law” part was a technicality.  They were his daughters.  Grandchildren Kate, Rachel, Arthur, Adriana, Robert, Gabriel, Nathan, Caleb, Noah, and Jonah, along with great-granddaughter Makena, brought more love to the family. The family spent many days camping and fishing, frequently in Minnesota, often following a day on the lake with a family fish fry.

His love for family was only exceeded by his love for God and showing God’s love to the world. Whether you were a life-long church member, first time visitor, or met him some other way, you were a member of his flock. Even when he could no longer speak, his voice of faith was still heard through his sermons and prayer blogs.  Many members of the flock became members of the family as he became a father figure as well as spiritual mentor.

Holding firm to his faith in the Savior, Arthur entered His Kingdom on September 13, 2015.

In lieu of flowers, donations may be made to Christ United Church of Christ in Belleville.  Condolences may be expressed to the family online at www.rennerfh.com