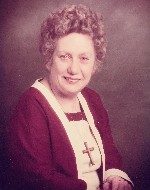 Born and raised in New Orleans, Louisiana, and a 1944 graduate of Newcomb College of Tulane University with a Bachelor of Mathematics, she met her husband Lawrence Handley, of East St Louis, IL, during World War II. They married on June 4, 1947 and raised two children in Belleville IL. Helen received her Master of Religious Education, Bachelors and Master of Divinity from Eden Theological Seminary. She was ordained on September 19, 1965. She led several congregations in St Louis, MO and First Presbyterian in Kearney, NE as she served God and her community.

She was preceded in death by her husband of 34 years, Lawrence Handley, Jr, her daughter, Linda (Anastasia) Daspit-Samson; her parents, Richard and Mae, nee Lutchjens, Daspit; and her second husband of 16 years, Frank Fabre.

In lieu of flowers, donations can be made to Hospice of Southern Illinois or First United Presbyterian Church of Belleville, IL. Condolences may be expressed to the family online at www.rennerfh.com.

Funeral:  Due to Covid-19, a memorial service will be planned at a later date.