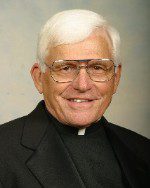 Fr. Jim was an avid baseball player in his younger years, as a strong left handed pitcher in amateur baseball.  He had great mechanical abilities,  and was often found  taking things apart and working on them.  These abilities led him to a lifelong interest in clocks and clock repair. He achieved certification as a master clock maker. His home was filled with the sounds and chimes of many clocks over the years, and many benefited from his repair work and clock restorations.

His ministry began at St. Casimir Parish in St. Paul, MN, where he was an assistant Pastor for one year. He then served at King’s House of Retreats in Belleville, IL, for 11 years as the Bursar and later Director. He then moved to California in 1971, and was a hospital chaplain for six years at Queen of the Valley Hospital in Napa, CA. He continued as a Chaplain at the Napa State Hospital for 40 years in Napa, CA, before coming to the Apartment Community at the Shrine of Our Lady of the Snows in Belleville, IL, where he resided at the time of his death.

He was preceded in death by his parents; his brother, Richard; and a sister, Lorraine.

Rev. Lantsberger is survived by his sister, Mary Ann Lane;
many nieces and nephews;
and Oblate brothers.

Funeral:  A Mass of Christian Burial will be held at 11:15 a.m. Friday, October 13, 2017, at the Apartment Community Chapel at the Shrine of Our Lady of the Snows, Belleville, IL.