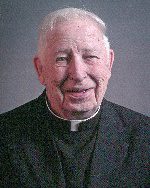 Fr. Taylor was born to the late Patrick and Katherine, nee Conlon, Taylor on Christmas Day of 1930 in Chicago. After his primary education in Chicago, he began his journey toward the priesthood and the Missionary Oblates of Mary Immaculate as a member of the very first freshman class at Our Lady of the Ozarks College and minor seminary in Carthage, Missouri, in 1944. In 1950, he entered the Oblate Novitiate in Godfrey, IL, where a year later, he pronounced his first vows as an Oblate. He received a B.A. degree in philosophy at St. Joseph’s Scholasticate in Ottawa, ONT, Canada in 1952. He completed his studies for the priesthood at Our Lady of the Snows Scholasticate in Pass Christian, MS, and was ordained a priest on September 21, 1956.

His first assignment took him to the headquarters of the Missionary Oblates in Rome, Italy, where he served as a secretary to the General Administration until 1960. Returning to the USA, he was assigned to the Missionary Association of Mary Immaculate, Belleville, 1960-1965. He also taught Religion at Cathedral High School in Duluth, MN (1965-66), and St. Benedict High School in Chicago, IL (1966-68).

He returned to Belleville and the Shrine of Our Lady of the Snows in 1968 where he spent 18 years working with prospective and current residents at the Apartment Community Retirement Center. From 1986 until 1992, he was Director of Kings House of Retreats in Belleville. From 1993 until his retirement, he again worked at the Missionary Association, helping to raise funds for the Oblates’ worldwide missions. He also served as religious superior of the Oblate communities at the Shrine and at St. Henry’s Oblate Residence.

He was preceded in death by his parents, as well as his sisters, Mary Taylor and Ruth Grotzke; his brother, Patrick Taylor II; and a nephew, Michael Grotzke.

In lieu of flowers, donations for the missions of the Oblates of Mary Immaculate would be greatly appreciated.  Condolences may be expressed to the family online at www.rennerfh.com.