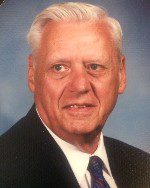 Mr. Martini was a lifelong resident of St. Clair County and a member of St. Henry Catholic Church in Belleville, IL. He enlisted in the US Navy during World War II, serving in the Pacific theater and again in the Korean Conflict.

Rex owned and operated Marex Tool and Die in Belleville, IL for over 40 years. As a leading member of the St. Clair County business community, he served as chairman of the board of the Catholic and Community Credit Union for 30 years. In honor of his contributions to the local community, St. Clair County Board Chairman Mark Kern declared July 8, 2017 to be “Rex Martini Day” throughout the county. Rex recently celebrated the occasion, and that of his 90th birthday, with family and friends.

He and his wife of 60 years, Wilma, traveled extensively in retirement, including trips to Vatican City, Italy, Germany, Ireland, Hawaii and to visit family members around the country.

Rex enjoyed playing golf and riding motorcycles.  Always a skilled handyman, he enjoyed collecting and restoring classic cars with his sons. He was also a terrific dancer, and never shied away from an opportunity to attend parties and celebrations.

He was preceded in death by his wife, Wilma Rose, nee Walter, Martini, whom he married on April 18, 1953 at St. Peter’s Cathedral, Belleville, IL, and who died on November 14, 2013; his parents, Clarence G. and Marie, nee Lucker, Martini; and a brother, Ralph Martini.

In lieu of flowers, memorials to the Althoff Catholic High School Capital Campaign or to St. Henry’s Catholic Church in Belleville, IL are appreciated. Condolences may be expressed to the family online at www.rennerfh.com.

Visitation:  Friends may visit with the family from 9 to 10 a.m. Monday, July 31, 2017, at Valhalla Gardens of Memory Mausoleum Chapel, Belleville, IL.