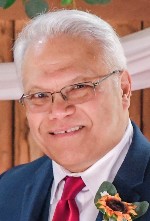 Rich was a devoted husband, loving father, and loyal brother. He graduated from Belleville West High School in 1970. While in high school, he was a triathlete and played football, basketball, and baseball. Rich went on to attend Western Illinois University on a sports scholarship and continued to play both football and baseball. He was a part of the 1974 Hall of Fame Western Illinois Baseball Team. Rich graduated with a bachelor’s degree in business and spent his life working for Peabody Energy. Rich loved playing sports and shared that love of sports with his son, Austin. He coached his son and many other athletes for years.  Rich made an impact on the lives of so many kids through coaching, as well as being a beloved driving instructor. One of his favorite pastimes was following the Freeburg Volleyball Team and cheering them on.

Richard “Bear” Caravia touched the lives of all that had the pleasure of knowing him. Most knew him as loud, but his close friends knew the louder he was the more he loved you.

He was preceded in death by his parents, Joseph and Maria, nee Ometer, Caravia.

Memorials may be made to American Heart Association or American Diabetes Association . Condolences may be expressed to the family online at www.rennerfh.com.

Burial will be at Lake View Memorial Gardens, Fairview Heights, IL, at a later date.