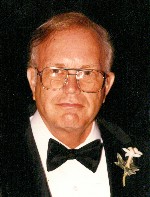 Dick was a graduate of Central Catholic High School and Washington University with a mechanical engineering degree. Richard was a U.S. Navy Veteran. He was president of General Installation Co. in St. Louis. He was past president of the following organizations: Althoff Catholic High School Board, Queen of Peace Holy Name Society, Lincoln Trail Optimist Club, Ozark AAU of St. Louis, Southern Missouri and Illinois and the AAU Swimming Committee. He was the past chairman of the St. Louis Mechanical Contractor and Pipefitter’s Local 562 Joint Apprenticeship Committee, Vice Chairman of the Salvation Army Advisory Board, Chairman of Fairview Heights Planning Committee and Fairview Heights Building Board of Appeal. He was a Life Member of the Knights of Columbus 592, a member of the St. Clair County Serra Club, a founding member of the Lady of Snows Layman’s Association, and on the Call for Help Board. He was awarded the Liberty Bell Award by the American Bar Association for outstanding community service. Richard was a former parishioner of Queen of Peace and St. Henry’s Catholic Churches in Belleville. He was a current member of Holy Trinity Catholic Church in Fairview Heights, Illinois.

Special thanks to our friend, Sandy Pietroburgo, his caregiver from Home Instead and Dr. Brad Ringhofer and Dr. Jennifer Neville who provided Richard with excellent care over the years.

Memorials may be made to the Serra Club of St. Clair County or Caritas Family Solutions of Belleville. Condolences may be expressed to the family online at www.rennerfh.com.

A private family Mass and burial will be held. A celebration of Richard’s life will take place at a later time.