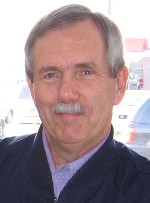 After joining the Air Force with his good friend Dick Crovitz in 1963, one of his first assignments was to England where he met and married an English woman who would be his wife for the next 47 years and they would travel the world seeing many different countries and States.  He retired from the Air Force after more than 20 years and went on to serve the Department of Defense as civil service for another 20+ years at Scott Air Force Base (DITCO, DISA CONUS).  He was a lifelong fan of the Detroit Tigers and had a lifelong passion for running.  He was a member of the St. Louis Running Club and the Mudd Duck Running Club and could be found every morning of the year running or walking (no matter what the weather) with good friends or by himself and every Wednesday evening during the summer running (or walking in the last few years) over in Forest Park. He ran several marathons and seemed to have learned all the back streets of every community he lived in by running most of them.  He is much loved and will be deeply missed by those who knew him.

He was preceded in death by his wife, Janet Jaworski; and his parents, Edward and Erma Jaworski.

Dick is survived his son, David Jaworski;
his daughter, Linda (Steve) Jaworski-Moiles;
his grandson, Joseph;
his brother, Bill Jaworski;
and by several cousins.

In lieu of flowers, the family would ask that any donations be made to one of the following organizations: Belleville Humane Society, Metro East Humane Society, American Cancer Society, or Hospice of Southern Illinois. Condolences may be expressed to the family online at www.rennerfh.com.

Burial will be at Jefferson Barracks National Cemetery.