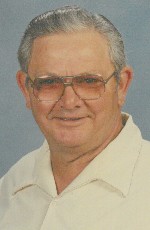 Mr. Raback was a meat cutter, retired. He was a member of the Meat cutter Union Local 534. Richard was a member of St. Peter’s Cathedral Catholic Church and the Exchange Club in Belleville, IL. He was a United States Navy veteran.

Richard was preceded in death by his wife of 59 years, Marguerite E., nee Richter, Raback, whom he married on June 28, 1953 and who died on September 27, 2012; his parents, Peter and Mary, nee Poropat, Raback; and two sisters, Norma Lee Raback and Marge (William) Bennett.

Funeral: A Mass of Christian Burial will be at 11 a.m. Friday, April 5, 2019, at St. Peter’s Cathedral, Belleville, IL, with Msgr. John Myler officiating.