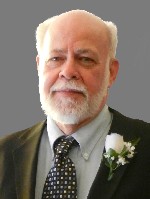 Mr. Schifferdecker retired in 1996 as a senior lab technician from Monsanto Chemical Company after more than 20 years of service.

Richard and his wife enjoyed traveling.  They visited all 50 states, four of the seven continents, and every major league baseball stadium.  Richard was an avid fan of all sports, but the St. Louis Cardinals were his favorite team.  He was an avid bowler, with nine “300” games and numerous “800” series.  Known to his fellow bowlers as “Decker”, he was inducted into the Greater Carlyle Bowlers Association Hall of Fame in 1994 and is listed in the National Bowling Hall of Fame.

Memorials may be made to Cardinals Care or to the charity of the donor’s choice.  Condolences may be expressed to the family online at www.rennerfh.com.

Sorry to hear of Richards passing. My condolences to the family.
Leo Schaefer
Class of 59

Charlotte, we are so sorry Rich had to suffer so long; but glad his struggle is over and he is at peace. Our thoughts and prayers are with you. Love