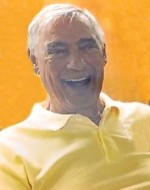 Dick was a 1955 graduate of Cathedral High School in Belleville and went on to earn both a BS and MS in Education from Southern Illinois University. His teaching career spanned over 35 years, beginning at Our Lady Queen of Peace Catholic School, followed by schools in District 118, including Henry Raab School, Washington School, Jefferson School, and most recently, Central Junior High School, before his retirement.

Dick also managed the Elks Westhaven Pool for many years, and previously managed the Collinsville Swimming Pool.  He was heavily involved with the Belleville Recreation Program for years prior to his teaching career.  He also enjoyed volunteering at The Labor & Industry Museum in Belleville.

Dick was a generous and kind man who absolutely loved children, but none more than his daughter and grandchildren.  He delighted in their every accomplishment, attended all school sporting events, performances and graduations, and when distance was a factor, couldn’t wait to hear a full re-cap afterwards.  He loved the St. Louis Cardinals, watching re-runs of Gunsmoke and indulging in a slice of his favorite homemade pecan pie.  He enjoyed spending time with his many friends, playing a game of golf with his teaching buddies, and as a retired teacher, serving as a student mentor at Jefferson School. Wherever he’d go, he’d be greeted by a former student or other person whom his life had touched.  He was loved by so many and will be deeply missed.

He leaves behind his daughter and son-in-law, Lisa and Barry Van Deman of Durham, NC;
his two precious grandchildren, Connor and Emeline Van Deman;
his brother-in-law, Jim Geary;
and his many nieces and nephews whom he loved dearly.

Dick’s daughter Lisa wishes to express her deepest thanks to his nieces Kelli (Wahlig) Schlich and Joan (Schulte) Mentzer and their families for their countless acts of kindness and care of their Uncle Dick over these past years.

At his request, memorial donations in Dick’s honor may be made to Belleville School District 118, or to Our Lady Queen of Peace Catholic School. Condolences may be expressed to the family online at www.rennerfh.com.