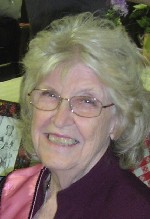 Mrs. Becker was a homemaker as well as the co-owner and book-keeper for her husband at Becker Appliance Service, Belleville. Rita enjoyed camping, playing cards, cooking, sewing, knitting, and especially spending time with her grandchildren, to all of whom she was a second mother. She was a member of St. Peter’s Cathedral, Belleville, IL.

She was preceded in death by her husband of 63 years, John J. Becker, whom she married on February 15, 1947, and who died on April 6, 2010; her parents, George and Laura, nee Schuetz, Feldt; two brothers, Herbert and George Feldt; and a son-in-law, Don Kassebaum.

Memorials may be made to the Missionary Oblates of Mary Immaculate. Condolences may be expressed to the family online at www.rennerfh.com.