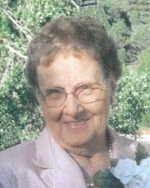 Rita graduated from the Academy of Notre Dame in 1942.  She worked in civil service at Scott Air Force Base for the Defense Commercial Communications Office for 25 years before her retirement.  Rita was an active member of St. Teresa’s Catholic Church and was involved with the St. Teresa’s Quilters and the St. Teresa’s Mothers Club.  She was also a cub scout den mother.

Mrs. Buehlhorn was known for her excellent sewing skills and loved to play cards with her family.  She thoroughly enjoyed watching the St. Louis Cardinals play baseball.  Rita will be deeply missed.

She was preceded in death by her husband of 67 years, Russell A. Buehlhorn, whom she married September 7, 1946, and who died June 27, 2014; her parents, Edward and Agnes, nee Schrader, Richard; two sons-in-law, Jeffrey Thomas and Steven Underdahl; and two brothers-in-law, Milton Buehlhorn and Robert Sheer.

The family would like to extend a special thank you to the staff at both St. Francis and the Dammert Center for their loving care of Rita while she was a resident there.

In lieu of flowers, memorials may be made to The Esquiline or to St. Teresa’s Catholic Church. Condolences may be expressed to the family online at www.rennerfh.com.

Visitation: Friends may visit from 9:30 to 11:15 a.m. Wednesday, October 16, 2019, at the Chapel of The Esquiline (Apartment Community) at Our Lady of the Snows Shrine, Belleville, IL.