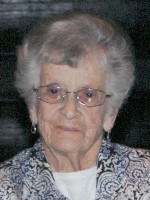 Rita, along with her husband, Paul, co-owned and managed the Town House Motel, Belleville, IL.  Rita was responsible for all of the day-to-day operations of the motel, and also managed to keep an impeccable house.  She always said, “A place for everything and everything in its place.”  Mrs. Haas was a great cook, loved flowers, and adored her family and friends.  She was a caring and hardworking woman loved by all.

The Haas family would like to extend a special thank you to the staff of Delmar Gardens South and Pathways Hospice for the loving care extended to Rita.

Memorials may be made to the School Sisters of Notre Dame or to the Alzheimer’s Association. Condolences may be expressed to the family online at www.rennerfh.com.

Visitation:  Friends may visit with the family from 4 to 8 p.m. Tuesday, February 20, 2018, at George Renner & Sons Funeral Home, Belleville, IL.