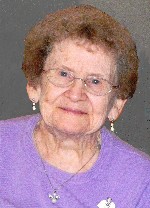 Mrs. Konradt worked in the bindery department at the Shrine of Our Lady of the Snows, Belleville, IL, for 17 years before her retirement.  Throughout her life, Rita was dedicated to her family.  With such a large family and little time to spare, she loved to make large family meals.  She enjoyed baking and decorating wedding, birthday and special occasion cakes.  If the occasion called for it, she made a cake for it.

Her creativity didn’t stop with cake decorating.  She was a self-taught seamstress, making clothes for herself, her daughters, and many of her grandchildren.  She also loved to crochet blankets and scarves and in recent years, plastic canvas was her craft of choice. Rita would start in January and have a special plastic canvas creation for everyone by Christmas.

Rita was preceded in death by her husband of 54 years, Stanley C. Konradt, whom she married on October 12, 1949 at St. Peter’s Cathedral, and who died on June 13, 2004; her parents, Joseph R. and Sophie, nee Reeb, Haas; a brother, Raymond Haas; a sister-in-law, Bernice Haas; and a son-in-law, Terry Schaefer.

Memorials may be made to St. Peter’s Cathedral or to Cathedral Grade School.  Condolences may be expressed to the family online at www.rennerfh.com.

To Dick and Elaine,

We send our sincere condolences at the passing of Dick’s mother, Rita. Will never forget the many get-togethers between the Weisserts and Wachtels.

Joe & Millie Gerling wish to express our deepest sympathy to the family of Rita Konradt. Joe worked many years at Eagle Foundry with Stanley.

Soph and family, I am so sorry to hear about the passing of your mom. She was always such a special person. I remember how she loved her family and church so much. Please know that you are in my thoughts and prayers as always. I am here if you need me.

Konradt Family
Please except our sincere sympathy on the loss of your mother. You will have our thoughts and prayers in this difficult time.

Dear Konradt Family:
Please accept my condolences on the passing of your mother. My mom always mentioned how she would see Jim and Mrs. K at Cathedral on Sundays, and so I know how close all of you were to her, and how important her faith was to her. Please let that same faith support you-all in this time of sadness.
Jim, you supported me upon the death of my father, and I will always remember that. My thoughts and prayers are with you and your family.