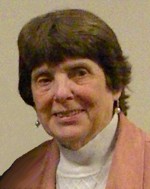 Print Obituary
Rita Rensing, nee Haas, 75, of Belleville, Illinois, born March 20, 1943, passed away peacefully on Friday afternoon, April 27, 2018, in her home with family by her side.

Rita worked as a medical technologist in microbiology and was a member of the American Society of Clinical Pathologists.  She retired from Memorial Hospital in Belleville where she was employed for 35 years.

Rita was a very special person.  Her hobbies included knitting, crafts, painting, stain glass art, as well as any and all remodeling projects.  She was a member of St. Henry’s Catholic Church and was a past member of the Cathedral mother’s club.  Rita recently dedicated her time and energy volunteering for Project Linus at Zion Lutheran Church where she met many beautiful, compassionate women who create blankets for children admitted to hospitals.  She enjoyed going to lunch with her friends from Memorial and painting under the direction of Angela Libell.

Rita was a loving wife, mother, grandmother, sister, aunt, and friend.  She was proud to support her husband who was a teacher and guidance counselor at Althoff Catholic for many years.  Her greatest joy in life was to spend every minute she could with her children and grandchildren.  Rita was their personal cheerleader at every athletic event and school activity.  She loved family vacations, playing cards, and baking with her grandchildren.

She was preceded in death by her parents, Adolph and Marie, Idoux, Haas; a brother, Donald Haas; a sister, Margery Haas; her father-in-law, Oscar Rensing; her mother-in-law, Edna, nee Ernst, Rensing;  a sister-in-law, Marilyn, nee Rensing, Haas; and a grandson, Henry Rensing.

She was truly strong and courageous in her tireless fight with breast cancer and eventually leukemia.

The Rensing family would like to extend a special thank you to the many supportive friends and family members, especially Reverend Kenneth York for the many visits, prayers, and good words.  In addition, the Rensing family would like to express their gratitude for the special care given by Dr. Alfred Greco, and his staff at Washington University Medical Oncology, and the nurses on the medical surgery floor at St. Elizabeth’s Hospital in O’Fallon.

In lieu of flowers, memorials may be made to Althoff Catholic High School, to St Henry’s Catholic Church, or in the form of masses. Condolences may be expressed to the family online at www.rennerfh.com.

Funeral:  A Mass of Christian Burial will be held at 10 a.m. Thursday, May 3, 2018, at St. Henry’s Catholic Church, Belleville, IL, with Reverend Kenneth York officiating.