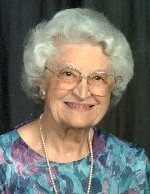 Rita was born July 22, 1924, in Belleville, IL. She lived most of her life in the home where she was born on Mascoutah Avenue. She attended the Academy of Notre Dame.  During World War II she was a member of the USO.  It was there that she met the love of her life, Vincent “Jim” Saia. While Jim served overseas, they courted via letter.  During that time, Rita worked as a telephone operator and secretary for two different companies.  They got married after the war and were eventually blessed with eight children.

Rita’s life was devoted to her family and community.  She was an active member of St. Peter’s Cathedral Parish and the Mothers Club at the grade school.  Rita was known for her loving generosity to others and was a volunteer with St. Francis Thrift Shop and Meals on Wheels.  Her friendliness, selflessness, and charitable heart were examples to her whole family and everyone she met.  She often said she never met a stranger.  Whenever an unexpected guest showed up on her doorstep, they were always welcomed.  She would say “I’ll just put another bean in the pot”.  She also was known to make sandwiches and hand them out to any stranger who would come to her back door.  She had a heart of gold and lived true to her faith, sharing her love with everyone who knew her.  Even during her long illness, her loving, kind spirit shone through and endeared her to her caregivers.

Rita was preceded in death by her husband of 68 years, Vincent James “Jim” Saia; her parents, Matilda and Carl Lindow; her sister and brother-in-law, Dorothy and Cletus Schlarman; a nephew, Thomas Schlarman; and two grandsons, James Saia-Hicks and Jarad Daughtrey.

Certainly, her lemon pie, orange fluff, and lamb cake will be missed, but they are just examples of the care and creativity she put into every detail of every event to make them special.

In lieu of flowers, memorials may be made to the Alzheimer’s Association.  Condolences to the family may be expressed to the family online at www.rennerfh.com.

Funeral: Due to the COVID-19 pandemic restrictions, the funeral will be private with burial alongside her husband at Jefferson Barracks National Cemetery in St. Louis, MO.  A family celebration of Rita’s life will be held at a later date when the quarantine restrictions are lifted.