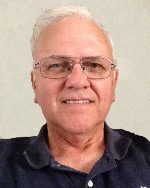 Bob retired as a computer programmer after having worked many years at many different places.  Most recently he was a bus driver on Bus #8 at Belleville East High School.  Mr. Bates was a U.S. Army Veteran, having served during the Vietnam era. He loved bowling and had played in many local leagues. He enjoyed traveling, long drives, baseball, golf, and was an avid St. Louis Cardinals fan.

Bob was preceded in death by his father, Charles E. Bates; his mother, Marian A., nee Mathis, Bates Shaw; and a sister, Charleen Wickerham.