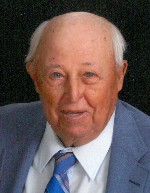 Robert was an Operating Engineer of Local 520, and retired in 2004. He bought his farm in 1952, after serving in the U.S. Army after World War II and during the Korean Conflict. He actively farmed his ground through May of this year. Robert enjoyed God’s creation, being outdoors, faming, and traveling through 43 of the lower 48 states, and several trips abroad.

He was a member of St. Teresa Catholic Church, Belleville, IL, the Knights of Columbus Belleville Council 1028, the American Legion Belleville Post 58, the Catholic War Vets, and the St. Clair County Farm Bureau.

In lieu of flowers, memorials may be made to St. Teresa Catholic Church, Belleville, IL, the Clergyman’s Aid Society of the Diocese of Belleville, IL, or to the charity of the donor’s choice.

Visitation: Friends may visit with the family from 4 to 8 p.m. Tuesday, September 6, 2016, at George Renner & Sons Funeral Home, Belleville, IL. A rosary will be said at 6 p.m. Tuesday at the funeral home.

Sorry for your loss, Len. MANY family and friends will help his loving memories live on.

From your friends and family at St. Ann Catholic Parish and School we are sorry for your loss and will pray for you.

I regret not being able to make Robert’s funeral, but I am happy that I got a chance to see him a few weeks ago when he was in hospice at his home and there wish him my best. I also have fond memories of our last meal together on the main drag in Lebanon a little more than a year ago when he and Len had come to see my dad at Cedar Ridge Nursing Home. Robert was full of life and always took an interest in his nephews and neices. He would have annual gatherings at his home on Mockingbird which were always fun for our family. I recall see Robert & Len by pure chance on the Admiral paddleboat on the Mississippi River. I was there for a school band trip and they were there for enjoyment, but it was nice to see them.
I pray for comfort for Len, Cheryl and family. Please accept my condolences on your loss.