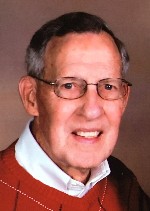 Mr. Blaies was retired from the City of Belleville where he worked for the street department and the city license department. He was a past alderman for the City of Belleville. He was a member of St. Augustine of Canterbury Catholic Church, Belleville, the Belleville/Swansea Moose Lodge 1221, the Catholic War Veterans, and the Knights of Columbus. Bob was a U.S. Army veteran. He enjoyed golf, bowling, playing cards, gardening, traveling, and spending time with his family. Bob truly had a zest for life. He never knew a stranger. He always had a smile on his face and a happy disposition.

Bob was preceded in death by his parents, Joseph W. and Magdalen, nee Hermann, Blaies Jr.; and a sister-in-law, Pat Blaies.

In lieu of flowers, memorials may be made to St. Augustine Catholic Church, Belleville, IL or to Hospice of Southern Illinois. Condolences may be expressed to the family online at www.rennerfh.com.