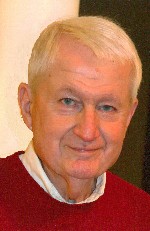 Bob was a certified public accountant and a founding partner of the Moore and Simonin, P.C. accounting firm. He was a longtime member of the Rotary Club and once served as its president.  For many years he was active in the Illinois CPA Society and the Southern Illinois chapter.   He took his athleticism to another level when he took up golf.  He enjoyed his days of playing golf with the men’s club at Clinton Hill and later joining St. Clair Country Club.  In his later years, he found perhaps his happiest times serving as Poppy to Lydia, Trixie Lu and Henry.

He was preceded in death by his parents, William M. and Isabella, nee Fesler, Moore; and a brother-in-law, Charley Pauli.

In lieu of flowers, memorials may be made to Hospice of Southern Illinois, or to Big Brothers Big Sisters of Southwestern Illinois. Condolences may be expressed to the family online at www.rennerfh.com.

Visitation:  Friends may visit from 9 a.m. to noon Thursday, August 6, 2020, at George Renner & Sons Funeral Home, Belleville, IL. Standard CDC guidelines, including masks, will be in place upon entrance.

As a final act of kindness, Bob gifted his body to science.