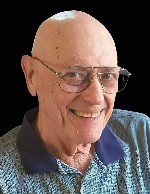 Bob was born and raised in Venedy, IL, and later settled in Belleville, IL. He was a United States Marine Corps veteran serving during the Korean War. Bob worked many jobs growing up. Later in life he became a machinist and worked for Independent Engineering / American Cryogenics and then T.J. Gundlach, retiring in 1994. Bob was a hard worker and always provided for his family. He was a member of VFW 1739 and the Machinist Union Local 313.

Bob loved softball. He coached and played on teams for the VFW – Post 1739 and the men’s fast-pitch softball at Southside, winning many championships. He also enjoyed coaching his son’s baseball teams and his daughter’s softball teams, which won championships 7 years in a row! Bob also played bank pool in many pool leagues and was known as one of “Belleville’s Best”. He also loved gardening, visiting his clubhouse, board games, a good game of pinochle, his old-time country music, and going to bingo with family and friends. Most of all he loved his family, and they always came first.

He was preceded in death by his loving wife of 61 years, Norma I. Brandmeyer, nee Krieber, whom he married on July 17, 1948, and who died on January 13, 2010; a son, Steven Brandmeyer; his father, Henry Brandmeyer; his mother, Lorraine, nee Brown, Brandmeyer Berkel; a sister, Dorothy Brasel; a brother, Eugene Brandmeyer; and his beloved fur baby, Mac.

The family would like to give special thanks to the staff at Breeze Hospice, especially Barb, Kip, Kim, and Candace, who were always there when they needed them. They would also like to thank his many doctors and nurses who always took their time with Dad.

Memorials may be made to Breeze Hospice, 14 Park Place, Swansea, IL 62226, or the National Veterans Foundation, https://nvf.org/veterans-memorials-dedications/.Condolences may be expressed to the family online at www.rennerfh.com.